Posted on October 4, 2012 by 9aijabooksandmovies 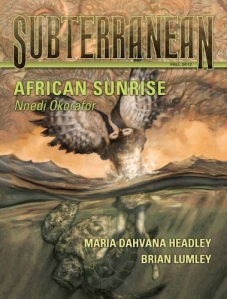 Award winning novelist Nnedi Okorafor has released AFRICAN SUNRISE (a novella), published by Subterranean Magazine. Illustrations were made by Eric Battle. The novella can be termed as a sequel to her earlier work “The Book of Phoenix” which was published by Clarkesworld Magazine)

The novella unveils a woman, grown in Tower 7 with a variety of other genetic experiments. She is ‘an accelerated woman’ with unusual abilities who experiences a rude awakening and finally begins to yearn for freedom. However, the price for freedom comes with a heavy, highly destructive price. African Sunrise has four parts: Specimen (previously published as “The Book of Phoenix”), Beacon, Reaper and Villain. It’s a riot of science fiction and fantasy set in the future… location…”United States” and “Africa”.

The e-book of African Sunrise is available on Kindle and Nook.

For those who have read her works… you’re in for another round of unique, interesting, highly creative story… and that’s guaranteed!

9aijabooksandmovies ( "9B&M") is the ultimate, credible platform that seeks to bridge the gap between Nigerian authors of fictional works and "primarily" Nigerian filmmakers, with a view to creating an upsurge in "adapted works" for the cinemas. It also provides an opportunity for millions of people to gain insight into the works of Nigerian authors and filmmakers. You can send your articles, news,views/opinion, reviews,samples of work to 9aijabooksandmovies@gmail.com.
View all posts by 9aijabooksandmovies →
This entry was posted in Uncategorized and tagged Nnedi Okorafor releases African sunrise. Bookmark the permalink.