Posted on November 10, 2012 by 9aijabooksandmovies 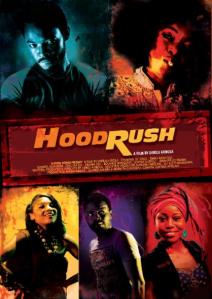 HoodRush is highly powered by music, an unusual genre adopted by Dimeji Ajibola in telling the story about love, passion, lofty dreams religiously stalked by ‘shattered pro’, daring ruthlessness… faced in Pursuit of Happiness. The lip synched songs which tow the Bollywood path, unveils song after song, which triggers off cinematic restlessness, except you’re a fan or patience happens to be one of your virtues. It is child’s play when compared to Bollywood’s renowned customary musical lifestyle powered on the big screen, but it still finds a sense of identity in the maze of untapped genres in Nollywood.

Two vocally talented brothers Shez (O.C.Ukeje) and Tavia (Gabriel Afolayan) dangle at the bottom of the social ladder. They dream of breaking into stardom having entered into series of talent hunt shows. The mega star dream is once more shattered following a scammed audition of a talent hunt show. Tied down with the chains of penury, despair and misery, Shez clutches at the straw of freedom Alhaja Kadisha- AK1 (Bimbo Akintola) offers him. This unwholesome relationship is financially rewarding and he dives into the pool of greed and selfishness, scheming to have his record label, but there’s a price he has to pay.

Lost in the garden of love he re-connects with the beautiful Shakira (Chelsea Eze) who becomes one of the victims caught in AK1’s business net, cast into the sea of illegality. Tavia , the younger of the two, still keeps the candle of hope burning having signed them up for the latest talent hunt show, “African Idol” organized by the renowned American Idol. He’s in love with Kelechi (Ijeoma Agu) who has been downtrodden by life and robotically obeys the whims and caprices of her aunt. She carries an emotionally torturing secret in her heart and with Shez lost in the sick world of guilty pleasures, the boys are on the verge of loosing out on a great opportunity that could change their lives forever…

Bimbo Akintola (Freedom in Chains) was spectacular, unequivocally playing the role of a sugar mummy, struggling with the waves of romantic insecurity, bitterness, chain smoking, ruthlessness and greed. She certainly hasn’t lost that golden touch in character interpretation. O.C.Ukeji and Gabriel Afolayan brought it on, as they lip synched to songs recorded originally by them. Gabriel gave a brilliant, emotionally triggering delivery in a heart rending scene that unveiled the consequences of making wrong choices, with his love Kelechi, (Ijeoma Agu of Hollywood Indie movie “AINA” by Maarore Pictures, and other soaps/stage productions, surprisingly the weakest link in the acting chain), bailing him out of his predicament.

The movie boasts of nice aerial shots, good cinematography, great songs worthy of massive airplay (written by Patrick Matthias) especially “Shakira” and “I believe in you boy” (being my top two) but left part of its movie clothing stuck in the “predictability trap”. Good sound and attendant effects (except the wind interference in one of the childhood scenes with their father), good sights and sounds, editing. It however, does not record a clean leap over the hurdles placed on the movie track as it crosses the finishing line in 2hours 25 minutes. The movie was shot for a month in Lagos.

Of course, the director didn’t tie up loose ends. The stringing of the guitar by O.C. Ukeji in the first song “e go better” appears flawless and could easily pass for the real thing, until his finger movements becomes inconsistent with the stringing output, then you realize they’re actually lip synching. It’s amazing how Shakira who comes on to Shez at the audition grounds, even calls him handsome and gives her his card, can’t easily recall their first encounter when they meet later on. Is it possible to forget a handsome face…zap!. The setting of the African idol auditions did not totally capture the activities of an audition of such a nature, at least we’ve got top musical shows in Nigeria as precedents.

There certainly was a miscast in the selection process of the Vee-Jay whose unlively performance fell below the highly rated presentations naturally associated with such folks. Is it possible to remain calm and collected when speaking on phone to your brother, having unravelled an illegal operation that would ruin another, with your family at risk of being harassed or killed?. Well ask Shez who escapes during ‘the night’, gets to the police station in ‘the morning’ and then heads for home and in the process calls his brother without that deep sense of urgency to leave home for fear of possible attack…yeah right!.

Tavia has been beaten black and blue in one of the scenes and has no special make up effect to originally depict the aftermath (at least a swollen eye). He instead relies on his acting dexterity to present to us an eye that is battling against being shut down. Amazingly, having been emotionally traumatized, battered and kept in police custody for three days, an inspiring song from his beloved Kelechi, sees him ‘suddenly’ sprinting “all the way” to the audition venue without stopping to catch his breathe… “bye bye pains”, just to meet up with the closing time of the audition. Whao! it’s great to have auditions where you register your name, don’t perform until the final day…please musical reality shows take note. Tavia still lip- synchs, how original can that be? and of course he’s live on TV.

The songs were initially cool to listen to, but soon becomes an unwanted distraction… just get the movie over and done with man!. It certainly had the musical genre flavour but can’t say same for the thriller tag in its synopsis. The story is unconvoluted, void of the thrilling sensation that rocks your entire being but makes up for the lag via its auditory opulence (if you are a music fan). Despite the flaws, Dimeji makes this debut movie with subtle suppleness playing around the firm edges of good production values.

9aijabooksandmovies ( "9B&M") is the ultimate, credible platform that seeks to bridge the gap between Nigerian authors of fictional works and "primarily" Nigerian filmmakers, with a view to creating an upsurge in "adapted works" for the cinemas. It also provides an opportunity for millions of people to gain insight into the works of Nigerian authors and filmmakers. You can send your articles, news,views/opinion, reviews,samples of work to 9aijabooksandmovies@gmail.com.
View all posts by 9aijabooksandmovies →
This entry was posted in Uncategorized and tagged HoodRush movie by Dimeji Ajibola, hoodrush premiere at silverbird galleria, Hoodrush starring Bimbo Akintola, O.C.Ukeje Chelsea Eze Ijeoma Agu. Bookmark the permalink.