Posted on November 12, 2012 by 9aijabooksandmovies 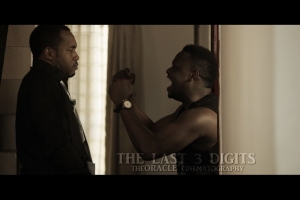 The story revolves around Alex, who after a chance meeting with Audrey, receives her phone number… but his joy is short lived as the phone digits are incomplete. He begins to randomly input the remaining three digits hoping that one set would be Audrey’s. However, the dialling of the wrong set of digits sees him being caught in the den of a violent gang, where he escapes death by the whiskers.

He resumes work and discovers that the company was actually owned by Audrey’s father. His joy knows no bounds… but is once more short lived as Audrey is now engaged to Marvin. Can he come to terms with this new development staring in his face as he yearns for his love?… or can he put the disappointment behind and move on with his life?

Hmm… your guess is as good as mine… let’s watch the flick when it’s released… shall we?

9aijabooksandmovies ( "9B&M") is the ultimate, credible platform that seeks to bridge the gap between Nigerian authors of fictional works and "primarily" Nigerian filmmakers, with a view to creating an upsurge in "adapted works" for the cinemas. It also provides an opportunity for millions of people to gain insight into the works of Nigerian authors and filmmakers. You can send your articles, news,views/opinion, reviews,samples of work to 9aijabooksandmovies@gmail.com.
View all posts by 9aijabooksandmovies →
This entry was posted in Uncategorized and tagged Ay Ali Baba Dr sid star in the last three digits, The last three digits by moses iwang and Padita Agu. Bookmark the permalink.