Hurray! Rita Dominic is in “The Meeting” 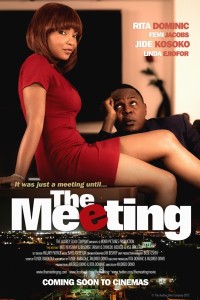 Abuja, the seat of the Nation’s power…plethora of bureaucratic red tapes…contracts up for grabs… only the ‘sharpest minds’ will walk away with the “Golden contract!”. A Lagos based Corporate Executive, Makinde Esho (Femi Jacobs of Tinsel) has been given the task by his boss (Jide kosoko) of securing the contract at the Ministry of Lands, Abuja. A meeting has been fixed with the Minister and he eagerly flies down. He reluctantly allows a pretty, but chatty NYSC Corper, (Linda Ejiofor of Tinsel) to take a ride in his car to the capital. His proposed meeting with the Minister fails to hold, no small thanks to the ‘in your face swivelling antics’ of his rude secretary Clara Ikemba (Rita Dominic Best Actress Amaa 2012 for Shattered).

Frustration sets in with various appointments he makes being marred by sudden ceremonial entrances by the elite, the powerful, ‘bottom power’ and his unwillingness to play the ‘sorting out’ game. Bored to death he hangs out with the corper and a fondness develops. Caught in the dilemma’s net with his boss breathing down his neck to close the deal and return to Lagos, his daughter insisting on his attending her graduation however inconvenient the situation might be, and the human barrier of a secretary that stands between him and the cherished meeting… he must act fast and does the unthinkable…

The movie’s title at first instance, gives one a false impression of a bland story, cloaked in a meeting, set in an office and all the dry attendant attaches that comes with such. On the contrary, The Meeting produced by Rita Dominic and Mildred Okwo, brings to bear in a lively comical manner the rock of Gibraltar many face in trying to secure contracts in government parastatals and by extension in the private domain.

It’s a good story told with rhythmic flow that keeps your eyes riveted on the big screen. Directing, cinematography with intermittent revelation of the capital’s land mark, sound, editing were good. Both lead characters were definitely on top of their game. Rita Dominic played the secretary’s role effortlessly swaying us off our feet, even a first time viewer of the actress would be deceived into thinking that in reality she speaks and acts that way. Her new look based on the makeup effects, costume, accent of a local Igbo girl, vibrant discharge of her secretarial role; carefree, rude, money conscious, biased, low self esteem problem, made her a delight to watch.

The soft spoken, ever courteous Makinde Esho’s role was successfully borne by Femi Jacobs. Although the movie lived up to expectation, one could not help but notice the soon ‘regimented’ way a member of staff of the hotel kept turning up to get his clothes to the laundry. They must have realized the monotony and had him at a point suggesting to Makinde to get new clothes. In one of the scenes the power authority struck while the corper was speaking to Makinde via her mobile phone, she tells him that she would have to light a candle… but what light was that outside the window?. Obviously the day for night shot for all intents and purposes was not well executed.

The popping up of unexpected guests at a point became predictable, and had it gone further, one’s interest would have begun to dwindle. Although the tail part was easily decipherable, The Meeting will go down as one of the best movies of 2013 with its non wavy execution of roles, comic relief, uncompromised professionalism and a fine blend of realism sizzled with razzmatazz!.

9aijabooksandmovies ( "9B&M") is the ultimate, credible platform that seeks to bridge the gap between Nigerian authors of fictional works and "primarily" Nigerian filmmakers, with a view to creating an upsurge in "adapted works" for the cinemas. It also provides an opportunity for millions of people to gain insight into the works of Nigerian authors and filmmakers. You can send your articles, news,views/opinion, reviews,samples of work to 9aijabooksandmovies@gmail.com.
View all posts by 9aijabooksandmovies →
This entry was posted in Uncategorized and tagged revie of rita dominic's The meeting, review of rita dominic's the meeting movie. Bookmark the permalink.