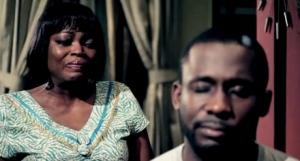 Kate (Funke Akindele of The Return Of Jenifa) a career minded woman is living the life!. She’s recorded a meteoric rise in her chosen field, wearing the creative director’s mantle and is married to an understanding, tolerant man, Mike (Joseph Benjamin). Their union has been blessed with a daughter. Life just couldn’t be better. A rude shock short lives the euphoria as she makes a swift descent from cloud 9 to reality. Her husband has been diagnosed with a medical condition; cancer of the lungs and needs to travel to India to receive treatment. She opts out of travelling with him based on high demands of her expertise, conscientiousness, and of course pressure from her boss Mrs Ibru (Joke Silva).

Her husband returns… a changed man, the once soft spoken understanding man becomes snappy and seeks solace in the arms of another woman, Titi (Kiki Omeli) her rival in the advertising sphere. Things continue to take a spiral downward trend when incriminating evidence points to her as the traitor in the camp who leaked out the company’s presentation pitch for a major advertising bid to the rival company. The heat is on and with her marital life in crisis she must make a decision between her marriage or career…

Adapted from the book written by Pastor Femi Faseru, Married but living single struggles to bring to life the ideals intended by the author. Although its adaptation is commendable, distinguishing it from those in the sea of original works, the stereotyped storyline, lack lustre performance, another couple from a subplot wherein the Executive Producer Kalejaiye Paul, who has no business whatsoever playing the role of Patrick (a wife beater), insults our sensibilities.

He has been summoned by the movie peeps and appears in the Movie Court before the presiding judge i.e this film critic, to answer to the grave offence of taking up an acting role without obtaining certified professionalism, which is contrary to section 7(2) of the Nigerian Movie constitution 1971. Having conducted the trial, I find him guilty and sentence him to the Executive Producer’s/producer’s life (strictly) without an option of fine or a second attempt at acting.

The clumsy nature in which incriminating photos of kate were taken, is laughable, especially a scene where the overhead shot was taken from the building where the target lived (not the neighbour’s). For one…how did he sneak into her house, all the way to the balcony, snapped and they just never knew. The movie lacks depth and just hobbles to the finishing line, only by the acting dexterity of the two leads. It’s a mishmash, ordinary, wanna be nice movie, that thank goodness comes to an end, much to my relief.

9aijabooksandmovies ( "9B&M") is the ultimate, credible platform that seeks to bridge the gap between Nigerian authors of fictional works and "primarily" Nigerian filmmakers, with a view to creating an upsurge in "adapted works" for the cinemas. It also provides an opportunity for millions of people to gain insight into the works of Nigerian authors and filmmakers. You can send your articles, news,views/opinion, reviews,samples of work to 9aijabooksandmovies@gmail.com.
View all posts by 9aijabooksandmovies →
This entry was posted in Uncategorized and tagged married but living single movie review, review of th emovie married but living single starring funke akindele. Bookmark the permalink.