Film Critic Releases Teaser Riddle Ahead of “FAS” : Can You Solve it?

Posted on August 16, 2013 by 9aijabooksandmovies 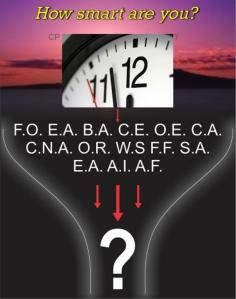 High flying film critic, Augusta Okon, has officially unveiled the teaser riddle in the build up to the gathering of eagles at the “FAS” in November, 2013. The riddle which has been tagged “How Smart Are You?”, is meant to test people’s knowledge about an important subject matter.

The event is being kept under wraps for the time being, however, the organizers say it will, without an iota of doubt, initiate a transforming process that will impact positively in the ‘Industry’.
Try solving the riddle beneath using the clues in the poster as a guide and let’s see how smart you are!. We’ll look out for your answers via this medium. The correct answer will be revealed on October 25th,2013.

I have been around for a long time, a generation yanked off by a century, though not as old as my contemporary within this shores. I didn’t have a flying start at the beginning and grappled to be relevant over the years. A homosapien from one of the cardinal points of dominance fell in love with me and I have always been part of his visually inclined calling. The icon from the path of the rising sun has slept but it was the work of his hands that brought me popularity. I have lurked in the shadows for a long while, now, the childhood memories, mother’s undying love for her child, split giant fiery orb in the horizon, the influence of deities in mankind’s existence, dirty secrets of those in authority within the hallowed sanctuary, have given me hope that my luck… is changing…WHAT AM I?

9aijabooksandmovies ( "9B&M") is the ultimate, credible platform that seeks to bridge the gap between Nigerian authors of fictional works and "primarily" Nigerian filmmakers, with a view to creating an upsurge in "adapted works" for the cinemas. It also provides an opportunity for millions of people to gain insight into the works of Nigerian authors and filmmakers. You can send your articles, news,views/opinion, reviews,samples of work to 9aijabooksandmovies@gmail.com.
View all posts by 9aijabooksandmovies →
This entry was posted in Uncategorized and tagged Augusta okon's, film critic's teaser riddle- how smart are you, how smart are you riddle by film critic. Bookmark the permalink.

4 Responses to Film Critic Releases Teaser Riddle Ahead of “FAS” : Can You Solve it?