Posted on September 10, 2013 by 9aijabooksandmovies 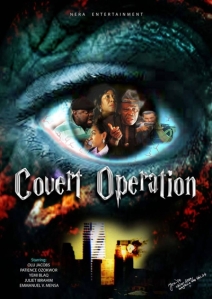 Covert Operation, as the name implies nestles comfortably within the action genre ambit. The movie directed by Alex Mouth, stars Olu Jacobs, Juliet Ibrahim, Patience Ozokwo, Yemi Blaq, and Emmanuel V. Mensah. It unveils a power drunken legislator, Senator Ivan (Olu Jacobs) and his clique, who are obsessed with subverting the nation and taking over the reins of power.

Amongst their numerous dark activities, is the importation of a biological weapon to scare the citizens, who would with the chaos that would follow, adjudicate for the return of the men in uniform. Ofcourse the canister containing the dreaded weapon of destruction is hijacked and senator Ivan recruits the services of a political thug who incidentally is his arch rival, Prince (Yemi Blaq) and Ms. Jane (Patience Ozokwo) of the state counter terrorism unit to retrieve the canister from Felicia a young girl abused by Senator Ivan, who is driven by the seeds of rage and revenge…but Prince works as a double agent with a dark past that haunts him…

This project is definitely daring and ambitious….many movie enthusiasts, pundits have watched flicks from Hollywood with this sort of plot..but this is from a Naija perspective taking it all the way…hmmm….it just has to live up to expectation and even surpass same…cos the critics tongues are set to clack at any given time…let’s wait till it’s released and pass the verdict …shall we?

9aijabooksandmovies ( "9B&M") is the ultimate, credible platform that seeks to bridge the gap between Nigerian authors of fictional works and "primarily" Nigerian filmmakers, with a view to creating an upsurge in "adapted works" for the cinemas. It also provides an opportunity for millions of people to gain insight into the works of Nigerian authors and filmmakers. You can send your articles, news,views/opinion, reviews,samples of work to 9aijabooksandmovies@gmail.com.
View all posts by 9aijabooksandmovies →
This entry was posted in Uncategorized and tagged covert operation movie, covert operation starring olu jacobs. Bookmark the permalink.