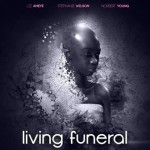 A short film titled “Living Funeral” directed by Udoka Oyeka has been selected to screen at the Cannes Film festival 2014. The short film is aimed at creating awareness on breast cancer with the support of the pink pearl foundation.A young girl battling with breast cancer in the last days of her life arranges a farewell for her family to help ease their pain. It stars Liz Ameye (nee Benson), Stephanie Wilson and Norbert Young.

9aijabooksandmovies ( "9B&M") is the ultimate, credible platform that seeks to bridge the gap between Nigerian authors of fictional works and "primarily" Nigerian filmmakers, with a view to creating an upsurge in "adapted works" for the cinemas. It also provides an opportunity for millions of people to gain insight into the works of Nigerian authors and filmmakers. You can send your articles, news,views/opinion, reviews,samples of work to 9aijabooksandmovies@gmail.com.
View all posts by 9aijabooksandmovies →
This entry was posted in Uncategorized and tagged living funeral short film, short film titled living funeral. Bookmark the permalink.