A Silent Cry: The Indigenous Movie Set To Make Waves In 2014 !

Posted on August 18, 2014 by 9aijabooksandmovies 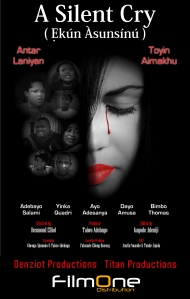 “A Silent Cry” – “Ekun Asunsinu” from the stables of Titan productions, has been slated for theatrical release on September 5th, 2014 and is distributed across selected cinemas by FilmOne distribution. A unique, intricately crafted story, delivered with dexterity by the finest of thespians in the Yoruba movie industry, A Silent Cry, will capture the visual attention of Nigerians, irrespective of tribe, as top notch professionalism was deployed in ensuring subtitling meets the set standard.

The movie was directed by Desmond Elliot and parades A-list Yoruba stars; Adebayo Salami, Toyin Aimakhu Johnson, Dayo Amusa, Yinka Quadri, Antar Laniyan, and Ayo Adesanya. The story revolves around Tomiwa (Toyin Aimakhu), a young lady from a comfortable home, who falls into the deceptive net of her lover. Having committed an act termed as unforgivable by her father, she is thrown into the sea of loneliness and battles with the waves of indecision, betrayal and dark secrets that threatens her very existence and the unity of her family!.

According to the MD of FilmOne, Mr Kene Mkparu, “we believe in good organic content whether told in the official or indigenous language, that can boast of good production values. We want to support diligent producers with fresh ideas whose works speak for themselves”.

This is the debut movie from Titan productions, and with good production values spun around an interesting story, A Silent Cry, is indeed poised to top the Indigenous movie charts in 2014.

9aijabooksandmovies ( "9B&M") is the ultimate, credible platform that seeks to bridge the gap between Nigerian authors of fictional works and "primarily" Nigerian filmmakers, with a view to creating an upsurge in "adapted works" for the cinemas. It also provides an opportunity for millions of people to gain insight into the works of Nigerian authors and filmmakers. You can send your articles, news,views/opinion, reviews,samples of work to 9aijabooksandmovies@gmail.com.
View all posts by 9aijabooksandmovies →
This entry was posted in Uncategorized and tagged a silent cry, a silent cry movie, a silent cry starring Adebayo Salami Toyin Aimakhu Johnson Dayo Amusa Yinka Quadri Antar Laniyan and Ayo Adesanya, a silent cry yoruba movie by shade effiong bassey, yoruba movie titled a silent cry. Bookmark the permalink.