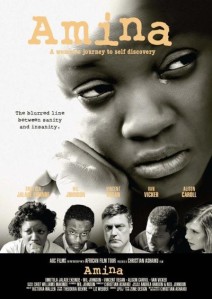 Following the resounding success of Ije, The Mirror Boy (Uk, Ghana and Nigeria) no small thanks we dare say to Genevieve Nnaji’s remarkable acting dexterity in the said movies, Nigerian filmmakers in the Diaspora and non-Nigerians alike, have sought the services of A-list Nigerian actresses and even actors to play the lead role.

“Amina” a movie directed by Christian Ashaiku has also joined the band wagon, and stars Omotola Jalade Ekeinde, Van Vicker and other members of cast such as Wil Johnson, Vincent Regan, and Alison Carroll. Don’t get it twisted, it’s not the historical story about Queen Amina which you might first be inclined to think of, (if you’re a good student of history), rather it unravels the story of a young woman who gets pregnant unexpectedly, goes through a maze of problems,which leaves her in a devastated state.

It’s an emotionally heart rending movie and only her psychiatrist is caring enough to pull her out of her misery… but there’s a little snag… he has a problem which he must first confront and overcome if he must help her win the last bout against the taunting punches of life, thrown within its boxing arena.

The movie was shot in various parts of London in 2011 and will be released in cinemas in October 2012!