Posted on March 14, 2017 by 9aijabooksandmovies 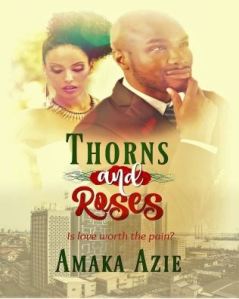 Thorns and Roses by Amaka Azie unveils the thematic issues around the girl child enveloped in a romantic plot. The protagonist Ifeoma is emotionally traumatized by her ruthless father while her mother stands by him despite his despicable acts against her and her siblings who are also girls. Her education is threatened when her Uncle who has been paying her school fees suffers a stroke.

In a bid to get some money, an arranged marriage is set up by her father, and the bride would be one of her sisters, Chioma. Ifeoma as the eldest tries to take the place of her sister and succeeds but then flees with her sisters to Lagos after the suitor tries to rape her.

Her hustling soon pays off and she sets up her restaurant “Eastern Delight”. In comes Chuma Obi, the rich guy and the romantic journey begins interwound with twists and turns and tear-jerking scenes that makes it a good read…

9aijabooksandmovies ( "9B&M") is the ultimate, credible platform that seeks to bridge the gap between Nigerian authors of fictional works and "primarily" Nigerian filmmakers, with a view to creating an upsurge in "adapted works" for the cinemas. It also provides an opportunity for millions of people to gain insight into the works of Nigerian authors and filmmakers. You can send your articles, news,views/opinion, reviews,samples of work to 9aijabooksandmovies@gmail.com.
View all posts by 9aijabooksandmovies →
This entry was posted in Uncategorized and tagged Amaka Azie, fiction by Amaka Azie, thorns and roses by Amaka Azie, Thorns and roses novel. Bookmark the permalink.