Troubled Dust : Latest Book by the Author of Eze goes to School

Posted on March 6, 2012 by 9aijabooksandmovies 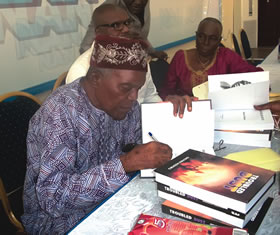 Author of “Eze goes to school” Onuora Nzekwu is out with his latest novel, “Troubled Dust”, a civil war themed novel. A few authors have written about the civil war such as Elechi Amadi( Sunset in Biafra), Akachi Adimora Ezeigbo (Roses and Bullets),Eddie Iroh (Toads of War), Chimamanda Ngozi Adiche( Half of a yellow Sun).

Onuora’s earlier works “Wand of Noble wood”, “Blade Among the Boys”, “High life for lizards” written in 1962, 1963 and 1968 respectively, amongst others, have made him one to be reckoned with in the literary sphere. He marked the 50th Anniversary of Eze goes to School (has a sequel Eze goes to College), during his 84th birthday, and also celebrated his 50th wedding Anniversary, on February 23 at the News Agency of Nigeria (media office) at the National Theatre, Iganmu. Talk about triple fold blessings!.

Representatives of the President, Minister of Information and other dignitaries showered encomium on him. Mabel Segun, Prof. John Pepper-Clark, Femi Osofisan, Akachi Adimora Ezeigbo, Dagga Tolar were present. Prof Osofisan, besides Chike Ofili, did a brief review of the book commending him on his stylistic approach. The author also autographed copies of the novel, which is available in major bookstores.

9aijabooksandmovies ( "9B&M") is the ultimate, credible platform that seeks to bridge the gap between Nigerian authors of fictional works and "primarily" Nigerian filmmakers, with a view to creating an upsurge in "adapted works" for the cinemas. It also provides an opportunity for millions of people to gain insight into the works of Nigerian authors and filmmakers. You can send your articles, news,views/opinion, reviews,samples of work to 9aijabooksandmovies@gmail.com.
View all posts by 9aijabooksandmovies →
This entry was posted in Uncategorized and tagged eze goes to school, Onuora Nzekwu, Troubled dudt novel, Troubled dust novel by Onuora Nzekwu. Bookmark the permalink.

1 Response to Troubled Dust : Latest Book by the Author of Eze goes to School